The Me Plays, Old Red Lion 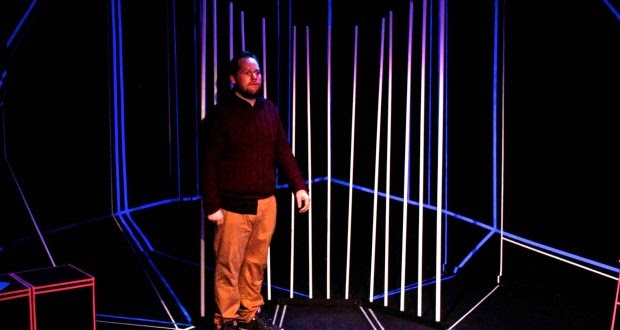 In the first play in his double bill of poetic, gently introspective, semi-autobiographical plays, Junkie, Andrew Maddock’s ‘Me’, wearing an unwise Topman jumper, is readying himself to go on a date with a woman that he has only ever met online, having swiped to the right on her photo on Tinder.

The play swims between memories of adolescence – the illicit buzz he felt as a teenager when first discovering porn in the pages of a magazine – and the man he has become, a little overweight and overwhelmed, but also isolated, islanded, by the constant availability of such imagery online. He agonises over whether or not to leave a ‘x’ at the end of his texts and holds his breath during those exquisite little gaps between the moment when a message is delivered and the moment in which it is seen. In “this digital age” his socialise unease is exacerbated and it’s easier to retreat into his cocoon, his self-made cage, than to meet new people, to risk rejection. While pornography is central to the piece, it’s never laddish or casual about it; instead it explores with intelligence the appeal of such imagery in a confusing world where irl interaction is fraught with insecurity and anxiety.

Potent as Junkie is the second piece is the stronger of the two; it’s a darker, more complex play. The red jumper has been ditched for a hospital gown and paper pants, as Maddock’s ‘Me’ awaits the results of a biopsy. Similar in structure to Junkie, Hi Life, I Win skips back and forth between childhood memories and the present but the writing here is freer and more fluid. Scenes of teenage rebellion, recollections of a volatile, frustrated adolescence within a constricting Catholic education system, are contrasted with tender and reflective scenes in which he awaits the results of his tests. The levity of the flashbacks gradually gives way to something darker and harder as he mourns his grandfather and stumbles in search meaning, and there are some highly poignant passages about what it is to be the son of a single mum, the closeness of that relationship.

Both pieces are laced with cultural references – the stuff of being a teenager in the 1990s: Gladiators, the Spice Girls and MSN messenger – but it’s gently done, the writing doesn’t hang on them; they just provide pleasant moments of connection if you happen to share them.

The decision to write in verse pays off as Maddock has a strong command of his text, the rhythms of it, the shape of it. The set by Charlie Marie Austin, a Tron-like cage of fluorescent strips elegantly lit by Christopher Nairne, is simple but striking, though its potential as a backdrop seems a little underexplored. While there’s an occasional static quality to Ryan Bradley’s production, Maddock’s warmth as a performer, his openness, and the sense of exposure contained in both pieces, overcomes this.

Reviewed for Exeunt
Posted by Interval Drinks at 6:07 AM